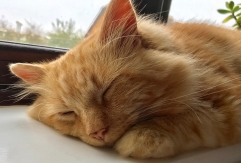 Meet Jasper…
Jasper was found by Bernie, who had this to say about him:

From the first day I saw him, asleep on my bird table – skinny and riddled with fleas – I knew he wanted to live indoors. Claire at MK Cat Rescue treated him, and I continued to feed him until a space was available. They supported me on every query and just before winter set in, his space arrived and Stewart collected him. Forever grateful to MK Cat Rescue that the lovely boy now has a forever loving home.

He then went to stay with our fosterer Lyn, who decided to call him Benji. She shared this:

As a volunteer fosterer for MK Cat Rescue, I always look forward to the arrival of a foster cat and WOW was I in for a surprise when Stewart brought a gorgeous semi-long haired ginger cat into my care in September. It was immediately obvious that he was very friendly and affectionate and just wanted to be loved. I chose the name of Benji for him. He had some sores and scabs on his body which were caused by him scratching himself due to a large amount of sticky grass seed burrs in his fur, they were like little sticky velcro balls and were tangled into his coat, which took a lot of brushing to remove them, but luckily he loved to be brushed. After 2 weeks most of the sores and scabs were gone, and he was a lot more comfortable.

Benji’s first visit to the vet was on the 12th September and he had his flea and worming treatment and vaccination, and an appointment was made for his castration. In the meantime, he had a very upset tummy and started to drink a lot of water so a urine test and blood tests were taken. The castration was postponed until the results were received.

Thankfully, his results came back and everything was okay, so it appeared his upset tummy was probably food related. Eventually, he had his castration and was microchipped. It was trial and error for a while trying out different foods to find one that suited him. He certainly loved any food that was given to him and went from his arrival weight into foster of 3.95kg to 5.06kg.
Sarah one of the MK Cat Rescue volunteers contacted me to say she had some food for cats with sensitive stomachs which was surplus to her requirements, as sadly their own cat Amber had recently crossed the Rainbow Bridge. When Sarah brought the food to me I introduced her to Benji and they were soon having a cuddle. It was obvious to me it was love at first sight. Her husband was outside in the car so I suggested he also come and meet Benji, which he did. I was secretly hoping they would both fall in love with him and want to adopt him, and well, can you believe it, shortly after their visit Sarah phoned me to say they would like to adopt him (I just felt like it was meant to be).
Benji had a health check at the vets on the 16th October and was given the “all clear” to go up for adoption. Later that day an excited Sarah and her family came over and completed the adoption paperwork and took Benji off to his forever home.
I was one very happy Fosterer and could not have been more happier for Benji. HAPPY DAYS.
And finally, a word from Sarah, Jasper’s new owner – 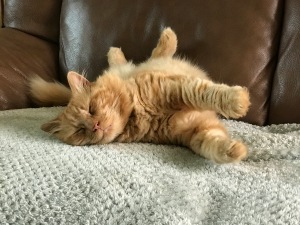 Well, as you can probably tell from the above, Jasper is a very sweet boy. I didn’t think I was really ready to adopt another cat – my lovely Amber had only been gone a few weeks, and we were all very emotional. Plus, with two golden retrievers, we knew we’d need to plan a new addition to our pack very carefully.

Jasper won me over within about 30 seconds – he’s not only handsome but incredibly affectionate. I wasn’t sure my husband would be so easy, but he fell in love at first sight as well, and I knew it wouldn’t take much to convince my step-daughter!
After a long discussion, we decided on the name Jasper.

And, as you can see, Jasper has fit in really well, within a few days he was very comfortable with my dogs. His stomach is fine now, and he’s a very hungry boy! He loves cuddles and likes to lay over my keyboard, or climb on my shoulders when I’m working at home. We all adore him, and we’re so glad to be able to give him a loving home, he certainly deserves it! Funnily enough, he’s just come to climb on me while I type this.
We’re very grateful to Bernie, MK Cat Rescue, and Lyn for everything they’ve done. And to all the supporters – your donations help us to care for cats like Jasper 🙂