Morris was initially reported to a couple of cat charities last summer having been spotted hanging around Westcroft shopping centre. 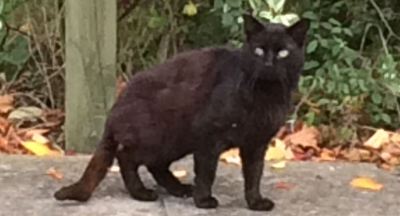 The cat was well known by staff both at Morrisons and Jollyes and we made some enquiries at the local pub where we received confirmation that the scruffy black cat with a unique eye colouring was definitely their cat.

We thought nothing more of it until a few weeks back when Morris was spotted in the car park and we knew the pub had changed ownership.  Turns out the owners of the pub had moved and taken their black cat with them…..this was a case of mistaken identity. 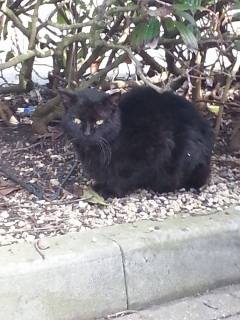 A couple of attempts were made to capture Morris but the cat was having none of it and then one of our volunteers heard that someone had trapped Morris.  We were concerned as enquiries with both the RSPCA and Cats Protection in Milton Keynes led to knowing neither had Morris….so where was he and who had taken him.
We put an appeal out and heard several mixed messages about him being trapped but also that he was still around.  We knew the only thing we could do was put up some posters in the car park at Westcroft and hope that perhaps this weekend whilst fundraising we would spot him.
Well yesterday whilst setting up our fundraising stall outside Jollyes a concerned member of the public told us about a cat that looked rather unwell was sitting the car park.  Could this be Morris….though the lady was describing a young kitten we were doubtful it was him.
Much to our delight Morris was laying in the shade under someone’s car but was still refusing to co-operate even when there were 3 volunteers from MK Cat Rescue and 2 members of the public trying to catch him.
We took the decision to set a humane trap and it was checked throughout the night and first thing this morning.  Whilst setting up the stall outside Jollyes this morning we checked the trap again and it had been set off.
We were delighted to see Morris inside. We’d only checked the trap 10 minutes before! 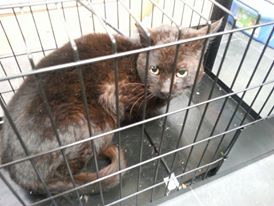 Morris will be given some time to settle but we’re just so pleased that Morris is safe and the residents of Westcroft can be assured that we will make sure he is safe and no more dodgy cars in the car park Morris!