Skip to content
Lovely Reggie came into our care 2 weeks ago.  He is about 6 years old and has spent most of that time hiding under a duvet cover and only coming out at night to eat and use his litter tray.
Whilst under the duvet he would happily have his chin and back of his neck fussed and you could even hear a little purr.
Last night though Reggie came out from under the duvet and spent time in the front room.  It’s moments such as those last night that really make fostering such a joy. 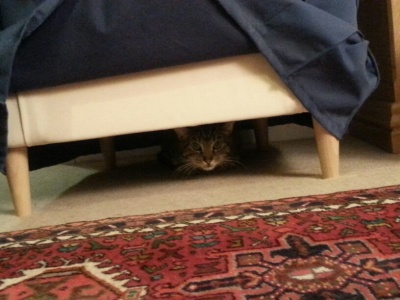 Sadly Reggie isn’t alone in being left on the streets traumatised and scared needing the time and love of volunteers. Reggie is one of the lucky ones.
We’re off to the vets next week with Reggie for a health check and then when he’s ready he’ll be advertised for homing.